I now have a big Toshi and Mick crush.

And a little Andy crush.

'Blurring the Lines' is a dark dystopian that revolves around the interactions (or lack of) between a new breed of people and humans. Toshi is a result of the two worlds colliding, human and I/S. He belongs nowhere and sometimes feels he is wanted by no one

Mick, a human cop abandoned as a child and left for dead, was taken in by a commune of intellectuals and raised in a way that makes him look at the I/S as no less than humans.

Because of his ideals Mick is forced to resign from a very corrupt police force and is tracked down by one of Toshi's people to become his bodyguard.

The shit then proceeds to well and truly hit the fan.

There are a few flaws in this, quite a few actually, the biggest and most difficult to overcome is the narrative. It hops around non stop and sometimes I wasn't entirely sure who's POV it was. It could change from one sentence to the next and back again. It was confusing and at the beginning off putting but I honestly got used to it by the middle and it didn't bother me that much. Likewise with the world building, it sometimes felt a little off and confusing but again by the end any confusion I had seemed to work itself out. I still have a few questions (mainly about shinning) but I think I'm supposed to, the second book sounds like it deals with I/S addiction and the aftermath. There is also some huge grammar and spelling issues and while the constant misuse of the word 'than' was annoying at times, now that I'm done I really can't bring myself to be that bothered.

Both Toshi and Mick have sad and difficult pasts (Toshi's in particular was horrific) and those pasts really shape the men that we meet at the beginning but it does become clear very quickly that what we see on the surface is not necessarily who they are. It seems they are showing the world what they think the world wants to see, learning about them was fascinating, watching them learn about each other was beautiful. 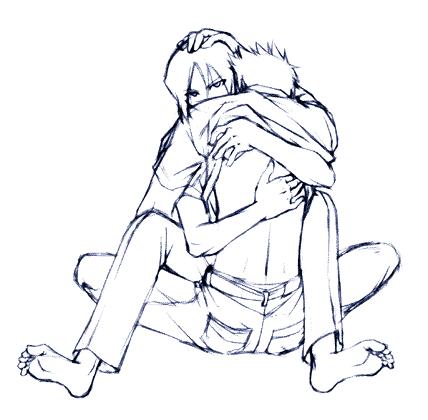 A huge amount happens in this book, thinking back I'm amazed at how the story was told in 290 pages. It's jam packed and I feel a little exhausted on behalf of the characters. I really, really want to know what's next for these two (and Andy) but I think I'm going to have to take a break from them for a little while. 'Blurring the Lines' only seems to be available on the authors website (which you have to become a member of in order to read more than the first 3 chapters) and I must admit I had difficulty with not being able to highlight and note passages and the white background really messed with my eyes. (maybe that's a reader setting I can change?) I'd love these in mobi or ePub files but it is what it is and I will be coming back to Toshi and Mick but it will have to be in the new year!