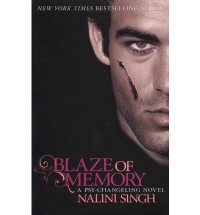 Since the very first time I read this Tyler Hoechlin was my Dev. He is not a perfect match by any means but it's who he is in my head. The biggest problem I had this read was that it's the first time I've read this since my Sterek addiction started. It's terrible but I really missed Stiles. I may have a problem.

Throughout this series Nalini Singh has given us more than just the world of the Psy and the Changeling's, she has shown us that humans should not be discounted and she introduced us to the Forgotten in 'Mine to Possess'. Book 7 and 8 of this series leave the Changeling's somewhat behind and concentrate mainly on Psy relationships with first the Forgotten and then Human.

We are definitely brought into more angsty territory here. Dev is the director of The Shine Foundation, an organisation which helps to identify and safeguard the descendants of the first wave of defectors from the PsyNet after Silence was implemented. He is ruthless in his role. In order to protect his people from the Council he feels he must be as cold and as unfeeling as them. To achieve this level of emotional detachment he embraces his gift, a gift that may very well turn him into that which he despises, a creature devoid of emotion but in order to protect his people he feels it is a small price to pay.

Katya is discovered by Dev abandoned on his door step. She has clearly been tortured both physically and mentally, she is also suffering from amnesia but the feeling that she is more than a victim and could well be a Trojan horse being used as a tool to either gather information about The Shine Foundation or eliminate it's director is voiced from the beginning. Also evident from the beginning is Dev's pull towards her, even in the face this potential threat.

Katya and Dev's story is one of my favourites. Katya is very much a victim at the start of this book, portrayed as weak and fragile but as the story develops we discover that she is anything but weak, she is a warrior who is fighting for what she thinks is right even if that means losing the small joy she has only just found with Dev.

Even though we might not get a huge amount of Changeling interaction in this book, make no mistake we still have a predatory male in our midst. Dev is no wallflower and he is just as demanding as any DarkRiver or SnowDancer male.

And as is the way with such men they can be stubborn and willful, there were moments throughout this though that Dev was just an asshole, I understand that he needed to protect his people and that no matter what way you look at it Katya was a threat but there were times he was just cruel.

This story definitely has a different feel to it then the previous books in this series and the first time I read it I remember being disappointed by the absence of my two favourite packs. But on the re-reads I felt anything but disappointment. I enjoyed getting a better insight to another group of people in this world, the Forgotten were fascinating and were made even more so by the diary entries/letters from a defector that were dotted throughout the story. These insights I think help us to understand the reasons for Silence, they also highlight what was both lost and gained by it's implementation and the fear, worry and hope that was felt by the very idea of Silence.

The end of this books absolutely slayed me, no matter how many times I read it I am a wreck afterwards. Nalini Singh has a way of ripping your heart out and stomping on it that is really rather cruel.

I love this book, I can understand why people might have been disappointed but I think once you accept that this is not a predominantly Changeling story it is just as enjoyable as the other's in the series.

Side note. I wasn't a fan of Ming in the other books but after this one?