The Queen & the Homo Jock King 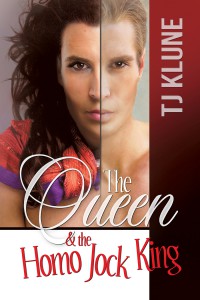 "You have to remember that people can change. Who we once were isn't who we're always going to be."

Over the top fabulousness! So what I've come to expect from TJ Klune basically.

Awkward dinners, word vomiting all over the place, ridiculous, and I mean ridiculous, UST. I was getting ready to kick Sandy and Darren around the place. For someone so awesome Sandy and Helena were like proper stupid.

This was everything I wanted it to be. I am like stupid in love with drag queens, I personally think that bars without shows are kind of crap (I recently went to my favourite bar on a night without a show and was absolutely crushed by the lack of pure magic) and this book is like being involved in a show.

I kind of still want to be a drag queen though!!

So this was lots of fun. Lots of insanity. Lots of ridiculousness and I wish it wasn't over.

Corey/Kori up next. Very excited about that and it means that we will get more Paul and Sandy magic!! YAY!!

"Well it's a good thing you're a bottom, because you're an asshole, so the two of you fit together just fine."

Paul looked rather pleased with himself. "Thank you. Wordplay is just like foreplay. You have to just into it a little-"

Oh and the group texts.

“Sandy, I look like I’m part of a Village People tribute band playing in a Four Seasons ballroom near the Milwaukie Airport. You look like you’re working undercover to catch pedophiles in the act. Nothing about this is fine.”