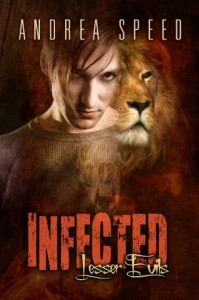 "Being human was overrated; humans were selfish, venal, and generally horrible to one another."

"So you're not perfectly human - so fucking what? Humans are hardly a gift, are they? People suck and you know it. You're better than them. Start acting like it."

I think this one has been the hardest in this series to read and I'm not altogether sure why. It had a runaway train feel to it I guess, that feeling that something terrible was happening and there was nothing that could be done to stop it. A shroud of despair hanging over everything as Roan thinks he is losing his 'humanity' in a world where to be honest, being human doesn't seem to be all that wonderful.

This series kills me, I find myself totally bummed out thinking about it but somehow in a book that is basically urban fantasy, Andrea Speed has managed to build something that is probably the most realistic portrayal of how utterly awful we all, as a species, truly are. There is hope, lots of hope and there is humor but there is also no doubt that it is the humans, the ones with capacity to understand the destruction they can inflict on the world as a whole, that are the true monsters.

"Holden was a predator who disguised himself as prey, acting like a victim until it suited him not to be. He wasn't a psychopath, but he was two steps and one mental shift away from it."

Holden is probably the most dangerous out of anyone in this series but he is also my favourite, well after Roan obviously, he lacks empathy and he has all the makings for a serial killer but if anyone is like Batman in this I think it's Holden. He is a vigilante whose main pull seems to be people who are too weak to defend themselves. People who are invisible and people who become lost because society does not deem them important enough to save or to find.